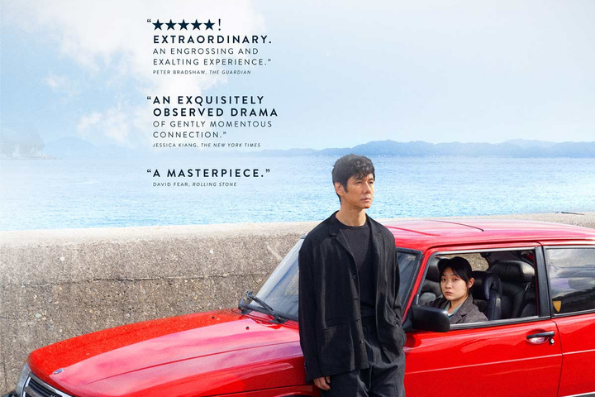 Check out the trailer here: https://youtu.be/6BPKPb_RTwI

Two years after his wife’s unexpected death, Yusuke Kafuku (Hidetoshi Nishijima), a renowned stage actor and director, receives an offer to direct a production of Uncle Vanya at a theater festival in Hiroshima. There, he meets Misaki Watari (Toko Miura), a taciturn young woman assigned by the festival to chauffeur him in his beloved red Saab 900. As the production’s premiere approaches, tensions mount amongst the cast and crew, not least between Yusuke and Koji Takatsuki, a handsome TV star who shares an unwelcome connection to Yusuke’s late wife. Forced to confront painful truths raised from his past, Yusuke begins – with the help of his driver – to face the haunting mysteries his wife left behind. Adapted from Haruki Murakami’s short story, Ryusuke Hamaguchi’s DRIVE MY CAR is a affecting road movie traveling the paths of love, loss, acceptance, and peace. This film won three prizes at the 2021 Cannes Film Festival, including Best Screenplay.

“It feels as expansive as the whole world.” – Michael O’Sullivan, Washington Post

“What it is can be summed up in a word that’s often used loosely but fits the case here-a masterpiece, a mysteriously enthralling creation that keeps you guessing about where it’s going, then reveals its essence with astonishing clarity.” – Joe Morgenstern, Wall Street Journal

“The movie is tender like a rainstorm: only in the aftermath, after you’ve allowed time for its ideas to settle, does its full picture become clear.” – Stephanie Zacharek, TIME Magazine

Reservations are appreciated and can be emailed to lascauxmicrotheater@gmail.com or left at the theater hotline (304-473-1818).

SEE YOU AT THE MOVIES!