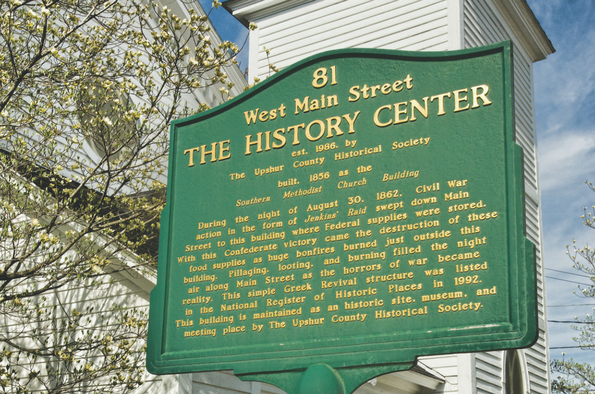 From June – September, The History Center Museum opens Sunday afternoons, for a special Summer Exhibit. The Museum is one of the oldest historic landmarks in Upshur County. Plan a weekend of History by visiting the Museum, shopping & dining in the Downtown Buckhannon Historic District, and visiting the 5 Civil War Trail Markers throughout the area.

During the Civil War, the structure was commandeered for use by the Federal government (as were most churches in this area) as a food commissary. Betty Hornbeck, in her book Upshur Brothers of the Blue and Gray, wrties that on August 30, 1862, following a battle of “Watertank Hill” in a Confederate victory known as “Jenkins Raid”, twenty to thirty captured Federal prisoners were marched first to the courthose and….

The oil painting inside the Museum, over the front entrance depicts the looting and pillaging of the frightening night so long ago. The History Center Museum is an historic structure, built in 1856 and is the oldest extant building on Main Street, Buckhannon. It was listed on National Register of Historic Places in 1992.